EDIT: Thanks to a fix developed by d0kk, controls are now way more precise. I hope you'll appreciate the game more.

You are STRG.SNEK, the computer repair program. The program is broken, explore the data and find out a way to repair it. But watch out for the data!

You can do it snek!

Made in part with ASCII Paint by phlp.

Thanks a lot for playing my game, check out my other stuffs here: http://touloutoumou.com/

As I wrote on AG, I created an account just to comment here (and throw in a couple of bucks).
This is the game I have been waiting for years.
It takes Nibbles (for QBasic), throws in VVVVVV and shakes it all up.
I often crave for some snek action, but all the other snake games around get old pretty fast and none gives a good challenge. This one — it delivers. Oh boy, does it deliver!


Granted, it can be tough in some points and there are a couple of rough edges: a map might be nice and some tweaks to the checkpoints might be welcome. Also, some screen transitions are pretty brutal.

But the concept seems tailor made to me. It's just that good. It feels good. It plays great.
From the bottom of my heart, thanks!

Has anybody gotten higher than Level 85? Also, is there something special I'm supposed to do on this screen? 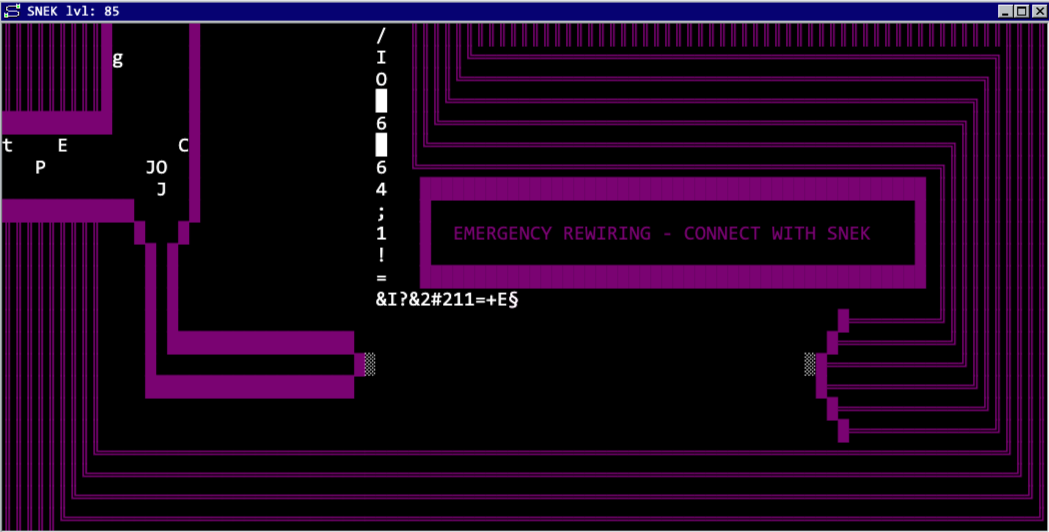 You need to bridge the two spaces that look like warp points with the body of your SNEK.  You have to go through them both vertically, or else you'll hit the wall to either side of them.

This is absolutely the successor to VVVVV. Does anybody have any guides or maps for this? I'm at Level 84

Brilliant game, reminds me of VVVVVV in the best possible ways.

At the moment I think it leans more towards frustration than fun, but if you could shift the balance the other way, this would be really terrific.

Things that are irritating:

- The vertical movement feels faster than the horizontal movement because the height of the characters that make up the snake/level is greater than the width.

- Switching screens is not great to begin with, as the player has to reorient quickly, but this is particularly bad when changing screens vertically, especially if you're rapidly heading for a wall on the new screen.

- The same thing goes for the green warp world. How could you better orient the player for where the snake is going to emerge?

- All of the warps could do with being 2-3 characters wide. It's not fun trying to hit a single square when the movement is often not precise enough to do this easily.

- I would strongly consider using any screen entry point as a de-facto checkpoint or implementing some kind of fast-travel. There's nothing more frustrating than trying to get back through a tricky section and then having to traverse multiple screens to find a letter or checkpoint that will take over from the letter you grabbed earlier, when every mistake sends you back to the letter at the end of a tricky section.

- Invisible walls in small doses are bearable. To have two worlds built around that mechanic is a bit much.

- If the game design is going to require me to die a lot then get me back into the game more quickly. The pop-up message adds an unnecessary delay and it also creates a sort of visual reset, especially if you just died in the area the message obscures.

Thank you, I just finished this and had a great time!

Is there some secret magic behind the walls? With a bit of a frogger luck I managed to walk some steps astray in the magenta world and it looked like you've been expecting the players to be able to get there, but that's too deadly for my fingers and luck.

Also, does colorswap do anything meaningful, could the color change be actually used anywhere?

(I'd probably love to see the death counter at the end. Or not)

I love this whole idea and the way you execute it. Nice touch with having Snake as a whole adventure game of sorts.

Cool game, but annoying to play bc the cursor keys UP and DOWN also make the page scroll up and down a bit. Would be cool if you could also control the game with the WASD keys.

(EDIT: wait, the scrolling only occurs with the keypad cursors, not the regular cursor keys)

Just beat it, nice game!
Last sections sure were challenging :-)

That was a real nice experience, thanks for making this! (Although one little aspect of the very end stumped me for a while, I had the correct idea but a tiny part escaped me).

AND of course: No progress was saved, so everything gone after reloading the page. RIP

Thoses were glitches I just fixed, you probably played while I was uploading the new version that's why you lose your progress, sorry :/ 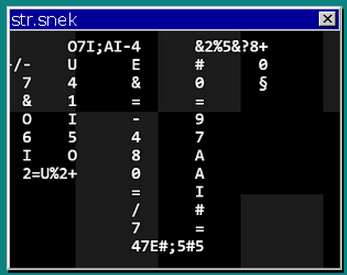